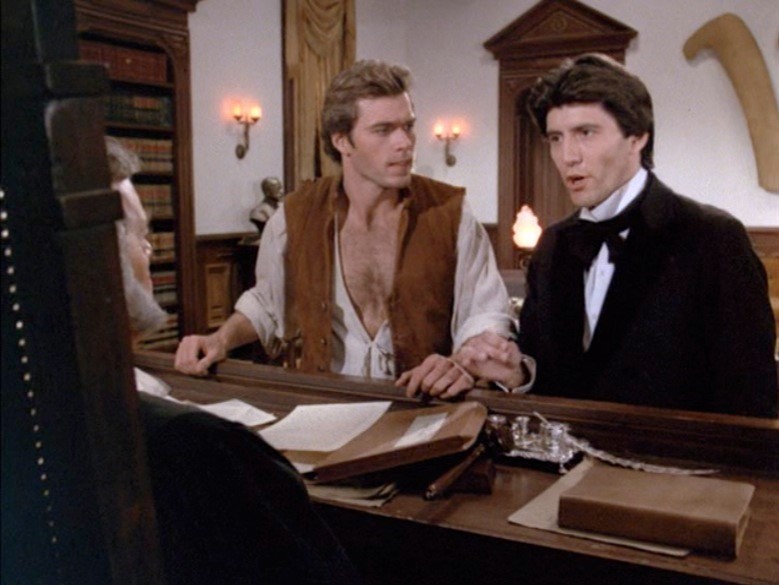 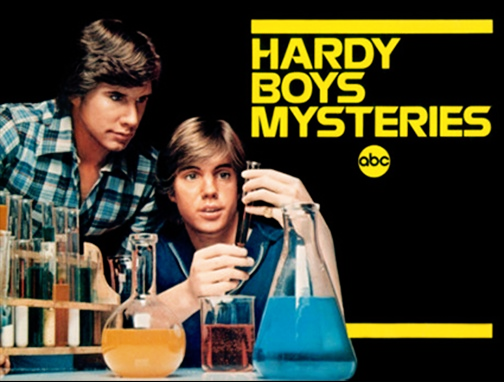 In “The Trial of Phineas Bogg,” Councilman Garth hands Bogg a parchment with vital information on Jeffrey’s future accomplishments written in calligraphy. Attempting to deceive the court, Voyager Drake somehow made it look like the recorded achievements of “Civilian” Jeffrey Jones. This proved Bogg was guilty of kidnapping Jeffrey, and he’d have to be returned to 1982. The truth’s eventually revealed – Jeffrey was destined to become a Voyager and go on to greatness. Perhaps even stopping Drake for good. It was no accident Bogg picked him up in 1982. 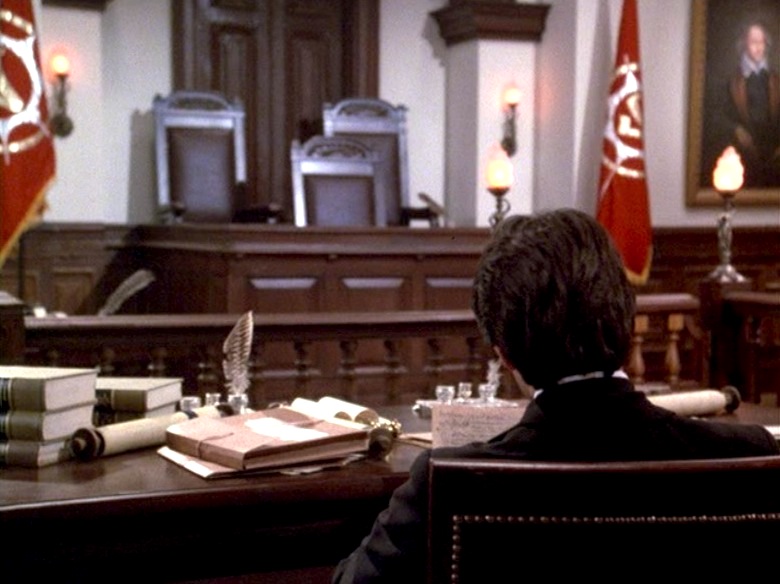 If you gave the document a passing glance, you might’ve thought it was written in Latin. But on closer inspection, the words are barely recognizable as Latin or English. My second guess was some Celtic language. The Tribunal, Drake, Susan, and Bogg can read and understand the document.

In 1984’s Voyager From the Unknown, it’s revealed that Headquarters is located far out in the cosmos on “Planet Voyager.” The Voyagers have their own flag if you look closely on opposite sides of the Tribunal Bench in the Trial episode. (See pic above) It’s only logical to conclude they have a written and spoken language different from earth’s languages. The concept is similar to the symbolic language of Gallifrey on Doctor Who (1963). 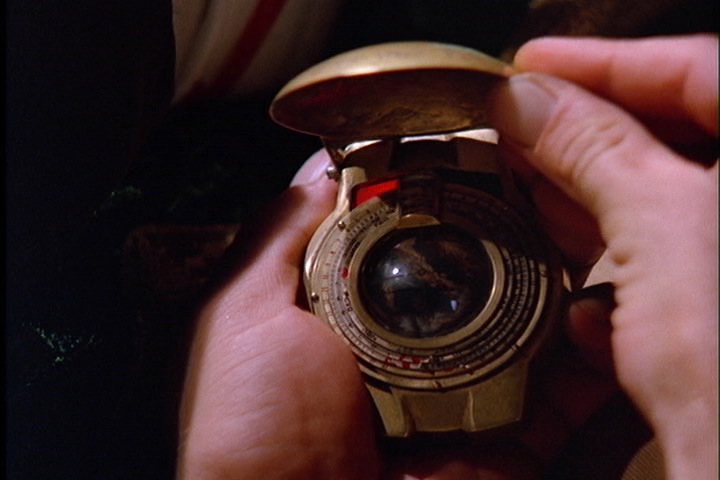 On the show, everyone speaks English no matter where the Voyagers land in the world. You’ll find that scenario in nearly every TV show and many older movies. Most fans accept a theory that the omni circuitry uses a translator function, giving the owner and those within radius the ability to hear their spoken language and vice versa. It’s a telepathic feat! It would make sense if the Guidebook followed the same pattern. While its contents are written in the Voyager language, civilians will see the text in their own Earth language. However, for the Voyagers to maintain discretion, only they may see their native languages, while civilians will see the Voyager text.

I imagine Bogg knows the Voyager language when he hears it and can follow along, but rarely if ever, speaks it. (Like me with Spanish.) He’d probably learned it in Voyager School. Or…is Bogg seeing Jeffrey’s parchment in English? It’s something to ponder. 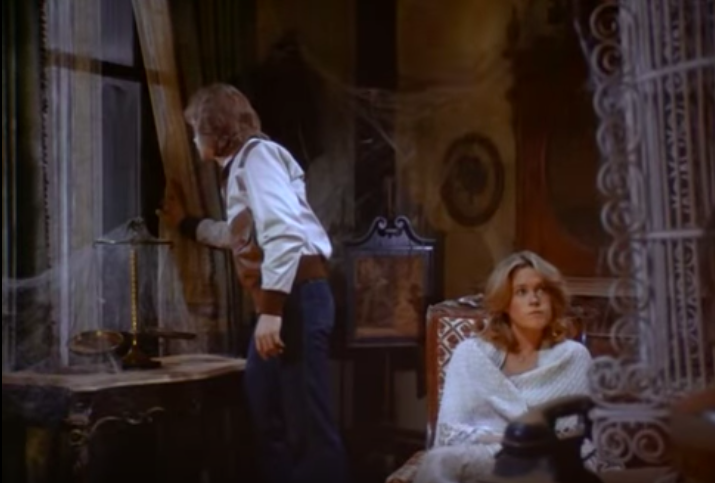 In a season 2 episode of The Hardy Boys (1977), “The House on Possessed Hill,” Joe Hardy helps the mysterious, clairvoyant Stacy, and they take shelter from an angry town posse chasing her on a dark and stormy night. Stacy is pretty and sweet (21-year-old Melanie Griffith plays her), but she gives off all sorts of creepy vibes while telling Joe the haunted history of the manor. 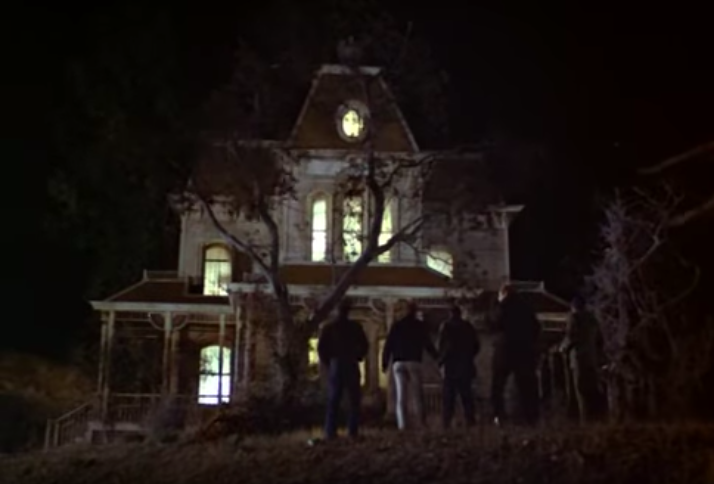 The Hardy Boys (1977) was a Universal Studios Production, and the Norman Bates House from Psycho (1960) was used in this episode because it’s part of the studio Lot. As the brothers exit the van and take in the scenery, Joe asks his brother Frank “I wonder if Hitchcock has seen this place?” I love the cheesy humor on this show. I did some digging, and it turns out the Bates House is owned by Alfred Hitchcock’s Estate, so all productions that use it must refer back to Psycho (1960) or Hitchcock. 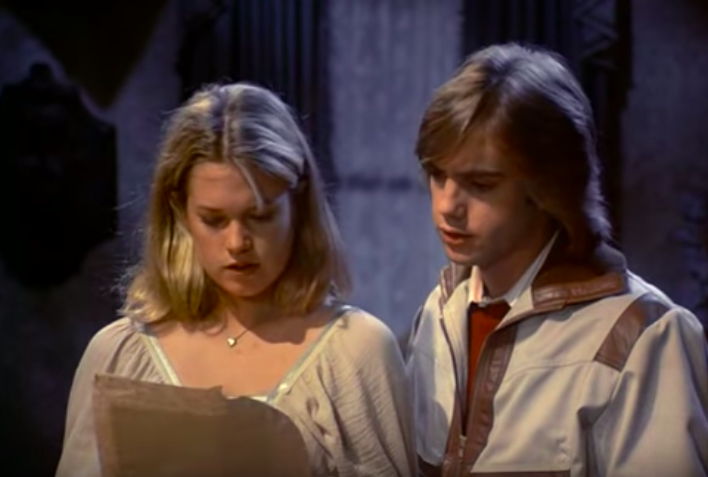 Stacy weirds Joe out further by telling him she hears a woman crying in deep sorrow. (The viewers hear it, too, along with other haunting sounds and music throughout the episode. Yikes.) She pulls out an 18th-century album with an old letter written by the former lady of the house. (The crying lady) And this is where I solved the mystery myself.

Somehow, this Gothic letter’s writing is the same writing on Jeffrey Jones’s historical parchment file. Talk about a time paradox! But not really, because this confusing word salad has different meanings on both shows. It turns out this enigmatic block of text and parchment is a studio prop. It’s what I call a “Universal Studios Language.”

Hmm … but it still sounds like a fun crossover idea for Fan-fiction! (Filing it away in my “Idea morgue. And I mean morgue. The last Voyagers! (1982) fan-fiction I wrote was in 2016, and it’s been left unfinished. I apologize.) 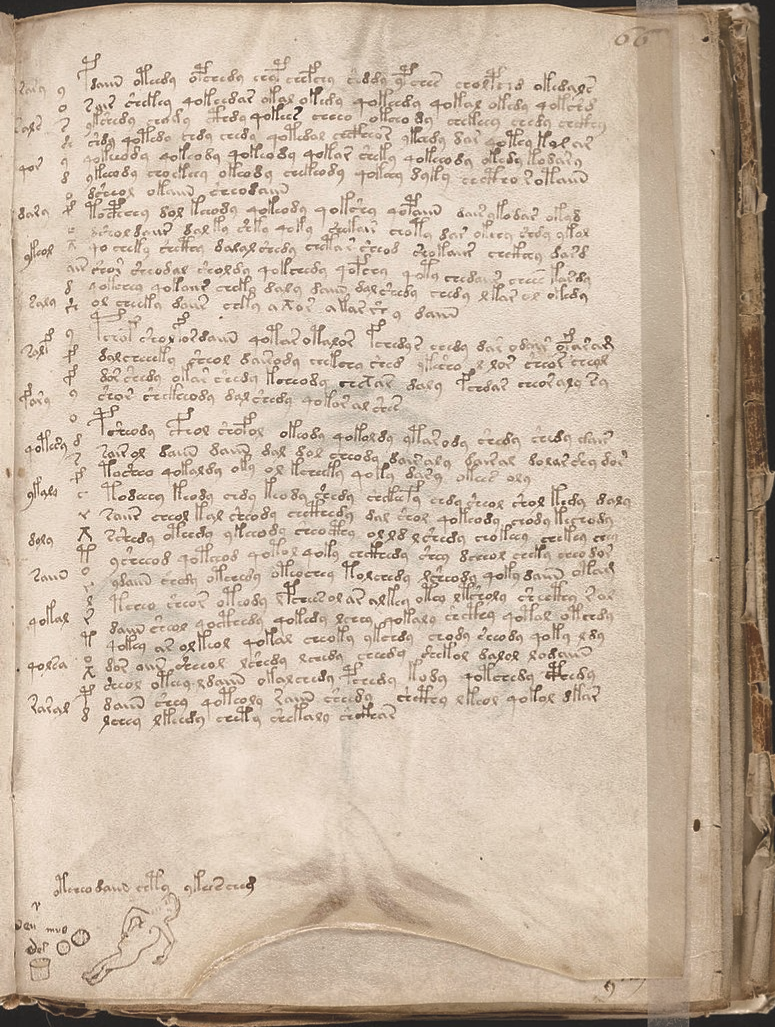 Thanks to a fan’s eagle eye, there’s a possibility the creator of the studio prop document was inspired by an indecipherable 15th-century hand-written codex named “The Voynich Manuscript.” Get it? VOYnich…VOYagers? Ehhh…there’s really no connection there. I just thought it was funny.

The Voynich manuscript is an illustrated codex hand-written in an unknown writing system. The vellum on which it is written has been carbon-dated to the early 15th century (1404–1438), and it may have been composed in Italy during the Italian Renaissance.[1][2] The manuscript is named after Wilfrid Voynich, a Polish–Samogitian book dealer who purchased it in 1912.[18]

Some of the pages are missing, with around 240 remaining. The text is written from left to right, and most of the pages have illustrations or diagrams. Some pages are foldable sheets. 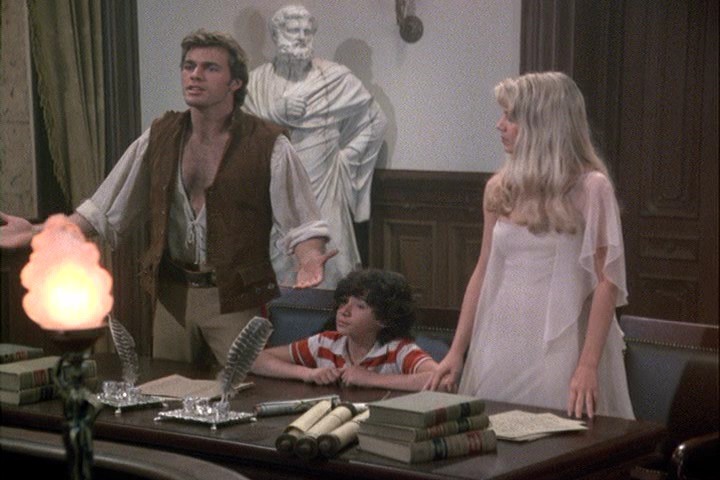 I can’t say I’m not disappointed after bursting my own bubble. While I’m generally very impressed with special effects, set pieces, and the artistry that goes into filmmaking, I usually dislike watching “Behind the Scenes.” It takes away the fantasy in the back of my mind that it could all be real. Something like this parchment I can’t “unsee.”

In the future, I’ll be on the lookout for this special block of text in other Universal shows from the ’70s and ’80s. I can imagine it showing up like other Voyagers! (1982) props on Universal shows such as Murder, She Wrote (1984) or Magnum P.I. (1982). Perhaps it goes back further? It would definitely be at home on The Munsters (1964) or Rod Serling’s Night Gallery (1970). I’ll need to break out my Night Gallery DVDs and check sometime. Who knows? Universal’s classic films may have used it too.

If you spot this Universal document or text again, please let me know in the comments; it’d be cool to make a list. So, despite the “movie magic,” do I still believe the Voyagers have their own written language?

The Voyagers are a semi-omnipotent race of people that have the power to monitor and change the flux of time! Of course, they do!