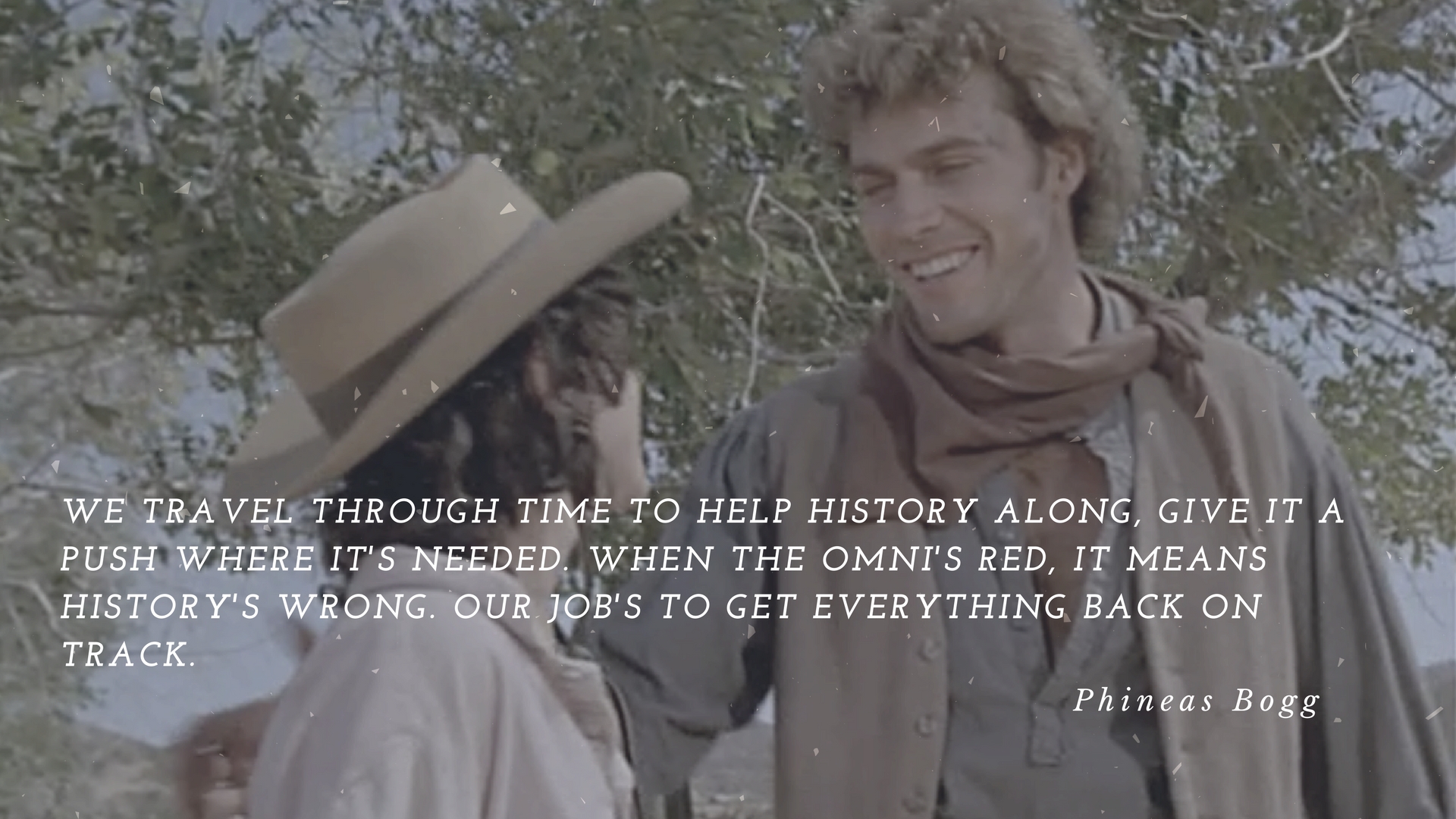 The Voyagers! Chronological Timelines were once part of the former Voyagers Headquarters website and were originally created by fans Caroline Bigelow and Charles Mento. I added the historical figures, additional notes, and fact-checked the text and dates.

1450 BC – VOYAGERS! (PILOT) – Bogg and Jeffrey rescue the infant Moses and send him in the Nile to the Pharaoh’s daughter.

73 BC – CREATED EQUAL – Spartacus is captured and unable to lead the slave revolt.

44 BC – CLEO AND THE BABE – Mark Antony finds Cleopatra

1275 – TRAVELS OF MARCO…and FRIENDS – A red-light situation arises. Marco Polo, Kublai Khan, Marco Polo, and his family never arrived in China. Voyagers Bogg, Jeffrey, and Wolfstein must rescue them from the Kauranas.

1292 – TRAVELS OF MARCO…and FRIENDS – Marco Polo remained in service to Kublai Khan from 1275 until this year.

1527 – TRAVELS OF MARCO…and FRIENDS – The year of Machiavelli’s death. (Voyager Drake was his star pupil.)

1669 – CLEO AND THE BABE – Bogg and Jeffrey meet Isaac Newton and coerce him to sit under the apple tree so he can discover the theory of gravity.

1746 – MERRY CHRISTMAS, BOGG – Young George Washington is persuaded by the Voyagers not to join the Navy.

1752 – BULLY AND BILLY – Bogg and Jeffrey help Ben Franklin with his kite so he can harness electricity in Pennsylvania, PA.

1776 – MERRY CHRISTMAS, BOGG – George Washington never joined the British Navy. He takes a historic trip across the Delaware River after Bogg and Jeffrey fix his history.

1798 – OLD HICKORY AND PIRATE – The Voyagers prevent Jean Lafitte from getting kidnapped by pirates and hung. They fend off pirates in search of buried treasure.

1799 – THE TOMB OF KING TUT – The smaller tomb is ransacked by Napoleon. (Un-aired Script)

1804 – OLD HICKORY AND THE PIRATE – Thanks to Bogg and Jeffrey, Lewis and Clark head in the right direction on their exploration.

1810 – OLD HICKORY AND THE PIRATE – Bogg and Jeffrey learn from Pierre Lafitte that Jean Lafitte, his brother, was captured by the Spanish and executed.

1836 – THE TRIAL OF PHINEAS BOGG – The Prince is a book by Niccolo Machiavelli. The Voyagers meet Bogg’s former classmates Voyager Drake and Voyager Susan. Bogg’s trial is presided by Voyager Tribunal Judges Garth, Brindle, and Kane. There seems to be no concept of time at Voyager Headquarters. Bogg’s Omni is disabled.

1847 – CREATED EQUAL – Hannibal, MO, Harriet Tubman should not be in the state of Missouri. Young Sam Clements helps Jeffrey free her from Bastain, the river gambler and slave owner. Bogg almost loses the Omni in a poker match for Harriet’s freedom.

1860 – SNEAK ATTACK – Jackie Knox, a ‘civilian’ from 1941, voyages from Pearl Harbor, Hawaii with Bogg and Jeffrey. Young Buffalo Bill Cody is a rider on the Pony Express. The Voyagers bring a motorcycle from 1941 to get past the outlaws on horseback.

1862 – THE DAY THE REBS TOOK LINCOLN – Lincoln is kidnapped in Pennsylvania, and the South prepares to win the Civil War.

1863 – THE DAY THE REBS TOOK LINCOLN – The timeline is repaired, and Lincoln gives his famous Gettysburg Address. Bogg and Jeffrey watch from the crowds.

1870 – THE TRAVELS OF MARCO…AND FRIENDS – Jeffrey inspires Clara Barton to start an American Red Cross after saving her life with mouth-to-mouth resuscitation.

1875 – BARRIERS OF SOUND – Alexander Graham Bell and Mabel Hubbard are supposed to marry in 1877. Bogg falls in love with Mabel. This could be why the phone was not invented. Though it’s apparent that circumstances and Bell’s shyness kept him from approaching her. Mabel’s father gives Bell the financial support to create the phone.

1876 – BARRIERS OF SOUND – The Voyagers help Bell finish his work on the telephone.

1880 – BULLY AND BILLY – Billy the Kid killed Teddy Roosevelt in the red-light history. Remington, the News artist, has a drawing for proof. Bogg and Jeff go back to correct it.

1887 – BUFFALO BILL AND ANNIE OAKLEY PLAY THE PALACE – The Voyagers must stop the impending marriage of Princess Victoria and Duke Michael of Russia. Annie Oakley is captured by the Duke’s men. Queen Victoria condemns the marriage.

1889 – JACK’S BACK – London – Jack the Ripper reappears, but it is really Drake this time. Bogg is blamed for attacking Nellie Bly. Drake wants to kill Nellie Bly and Sir Arthur Conan Doyle. Bogg says he was the inspiration for Jules Verne’s hero in his book, Around the world in 80 Days.

1890 – BARRIERS OF SOUND – Dwight D. Eisenhower’s mother is having trouble in childbirth, and telephones do not exist. When Bogg and Jeffrey return to the green-light time-zone, they help with the delivery after assisting Alexander Graham Bell.

1898 – BULLY AND BILLY – Cuban war for independence against Spain. Bogg and Jeffrey help Roosevelt make it to San Juan Hill.

1903 – PILOT – Bogg and Jeffrey go to Kitty Hawk, NC, and can’t find the Wright Brothers. They go back to Dayton, OH, to their Bike shop.

1912 – VOYAGERS OF THE TITANIC – Molly Brown is on Titanic and befriends Jeffrey. Professional thieves steal the Mona Lisa and Voyager Olivia Dunn’s Omni.

1913 – BUFFALO BILL AND ANNIE PLAY THE PALACE – Dr. Albert Schweitzer is held hostage in Africa until his medicine can save the Tribal Chieftain. Bogg rescues his assistant Joseph from work-traders.

1914 – WORLDS APART – Lawrence of Arabia is captured at the Akaba prison, and Bogg attempts to rescue him with the help of a courageous kitchen slave named Medina.

1916 – REMEMBERING THE ALAMO – The Voyagers get tangled up in espionage in Switzerland during WWI with Mata Hari and Winston Churchill. (Un-aired script)

1917 – BUFFALO BILL AND ANNIE PLAY THE PALACE – Russian Revolution – The British allied with Russia and fight in the Revolution because of an unlikely marriage between Princess Victoria and the Duke of Russia.

1918 – PILOT – WWI – Mary Murphy and Eddie Rickenbacker trapped in France – planes haven’t been invented, and the entire war is fought on the ground.

1919 – CLEO AND THE BABE – Babe Ruth pitches when he should be a hitter during spring training.

1924 – AGENTS OF SATAN – Houdini believes Bogg and Jeffrey are from the ‘other side’ when they land at a séance. This creates a red light until they convince him otherwise.

1924 – DESTINY’S CHOICE – The first ‘talkie’ movie was written by FDR. Bogg and Eleanor Roosevelt must encourage him to walk. Sara Roosevelt – FDR’s mother, treats FDR as an invalid. Jeffrey must stop the script from getting mailed to Hollywood.

1927 – CLEO AND THE BABE – Cleopatra toys with Prohibition. She unwittingly teams up with Lucky Luciano to kidnap Babe Ruth before hitting his 60th home run.

1928 – DESTINY’S CHOICE – Hollywood, The Jazz Singer must get made – it is the first talkie. Franklin Roosevelt is the director of the first talking movie instead of in politics. The Omni is mistaken for a movie prop and confiscated. In the green-light history, The Jazz Singer is released nationally, and FDR is on his way to the White House.

1930 – THE TRAVELS OF MARCO POLO…AND FRIENDS – Bogg saves Albert Einstein and his wife from a giant falling crate. They meet retired Voyager Isaac Wolfstein and take him on their adventures.

1938 – ALL FALL DOWN – Boxer Joe Louis is in training but quits discouraged. Bogg and Jeffrey convince him not to give up the second fight with Max Schmelling. Bogg helps him with Jeffrey’s guidance.

1941 – SNEAK ATTACK – The Voyagers help save General MacArthur during the Japanese bombing of Pearl Harbor. Jackie Knox pushes the General out of the way of aerial gunfire.

1945 – PURSUIT (aka RACE FOR SPACE) – In Austria, Bogg and Jeffrey meet Wernher Von Braun and his team of scientists. The Gestapo wants to turn Von Braun and the team over to the Russians.

1969 – PURSUIT – Apollo 11; The space program has been shut down in the red-light zone since German scientist Von Braun was captured by Russians in 1945. Every attempt at American space travel is a colossal failure, as seen by floating headlines.

1970 – ALL FALL DOWN – Jeffrey lands a hijacked plane after a sleeping gas knocks everyone out. The future president of the United States, Jimmy Carter, was on board.

1982 – VOYAGERS! (PILOT) – New York City. Phineas Bogg accidentally lands in Jeffrey Jones’ room and saves his life. Jeffrey is whisked away to fulfill his destiny as a Voyager, and the timeline begins all over again! 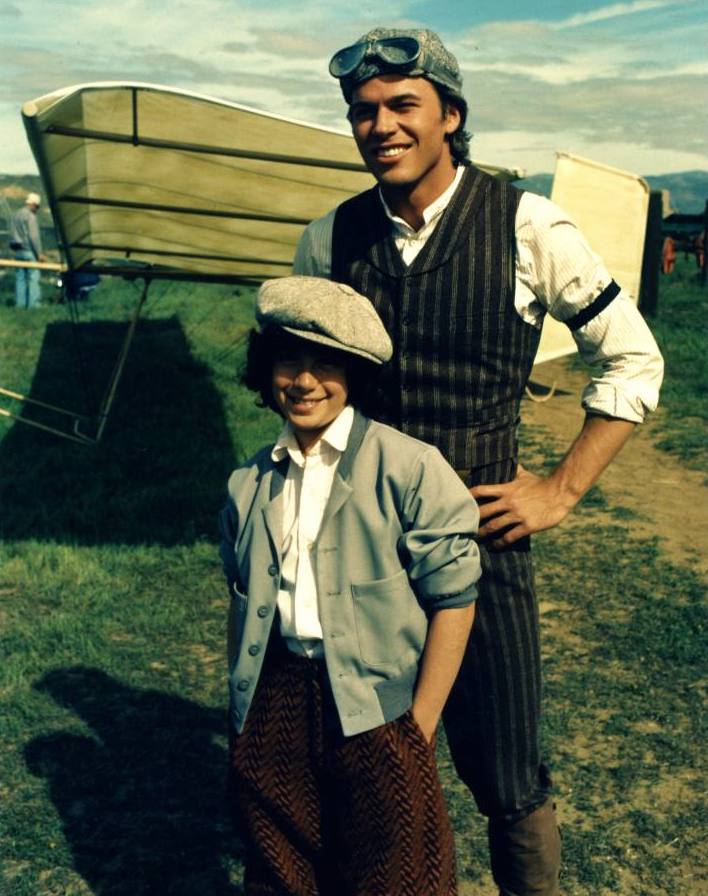