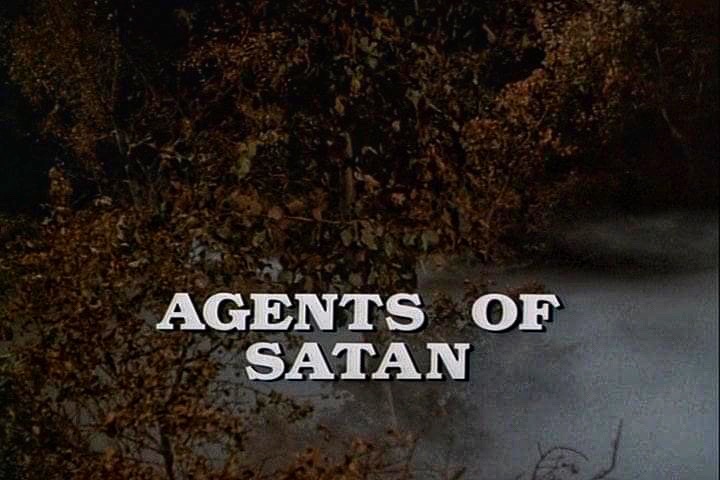 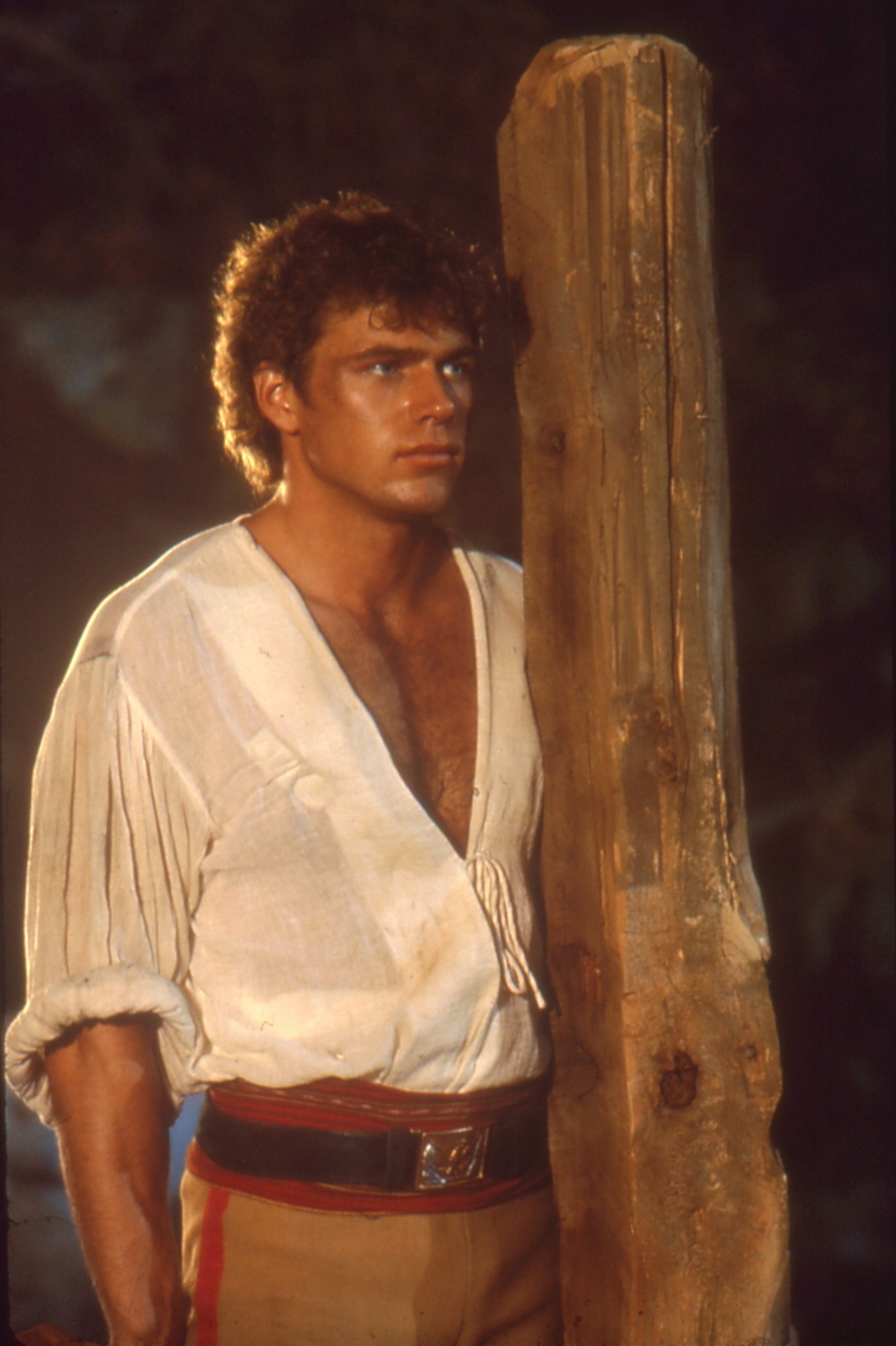 “It seems to me that angels fall from the sky!” – Phineas Bogg 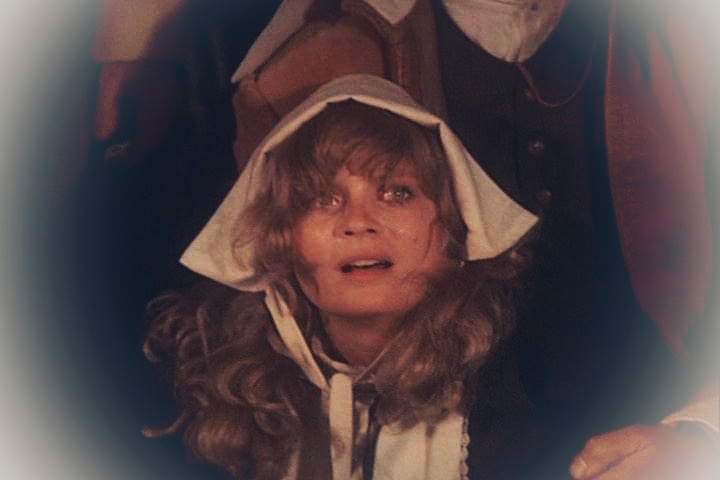 Abiah Folger, the future mother of Benjamin Franklin, is surrounded by an angry Puritan mob determined to execute her after a group of defiant young girls accuses her of practicing Witchcraft. 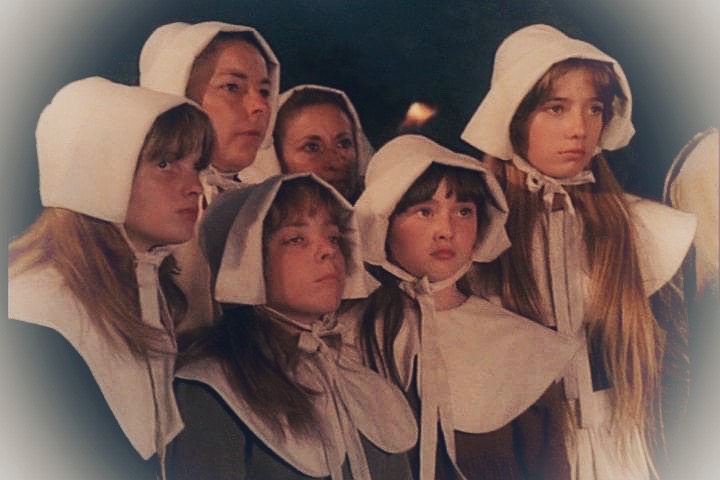 Abiah screams out a prayer for help. The Voyagers land just in time, and the mob believes they’ve come from the Devil.  The assembly jails the trio and orders them to stand trial. 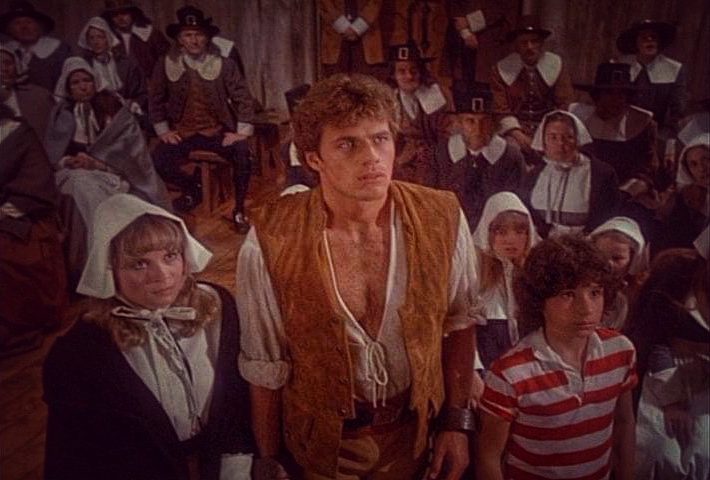 The courtroom’s awash with fear and superstition, and the judges sentence Abiah and Bogg to burn. Jeffrey is allowed to live out of compassion for his youth. 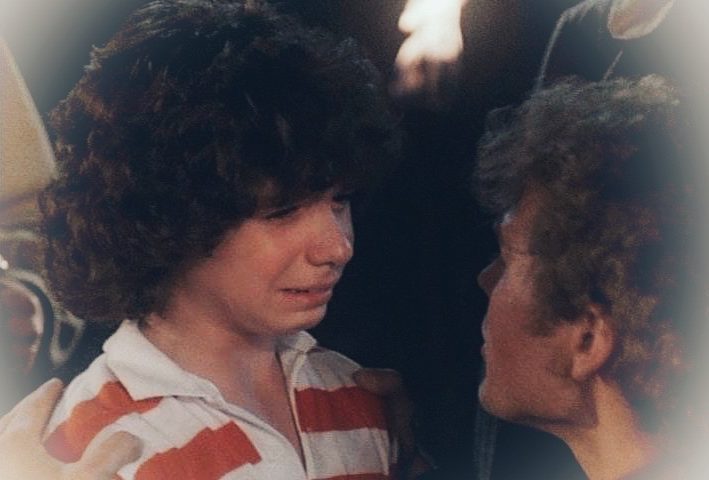 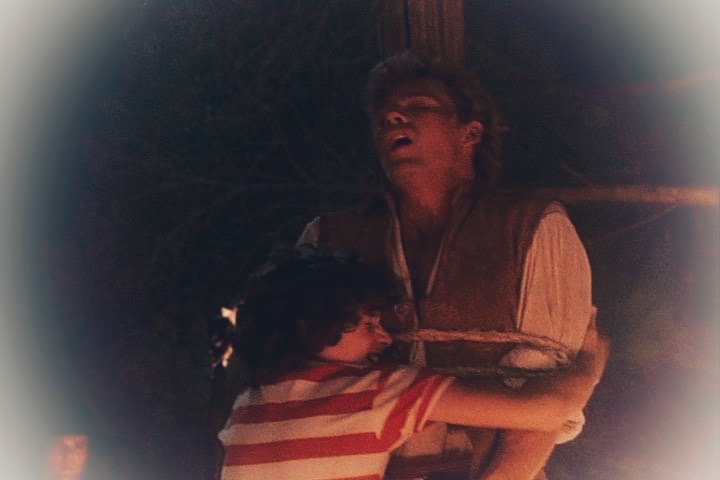 As the flames rise around Bogg, a judge holds up the Omni while making an impassioned speech. Jeffrey knocks him down, and the Omni falls near the fire. Jeffrey quickly swipes it up and disappears with Bogg, confirming the Puritans’ worst fears. 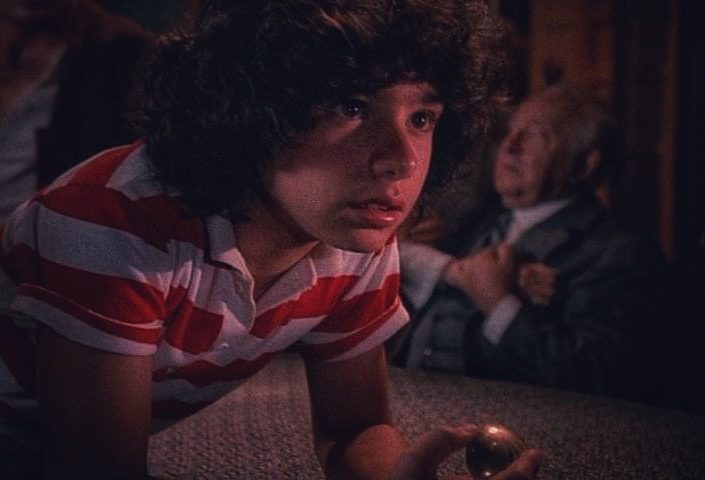 The Voyagers crash onto a dining table during a séance and frighten the guests. The Omni instantly turns red as Jeffrey checks it. The Voyagers quickly disappear before Jeffrey can say anything, and Harry Houdini, the great magician, escape artist, and supernatural skeptic, becomes a believer in ghosts. 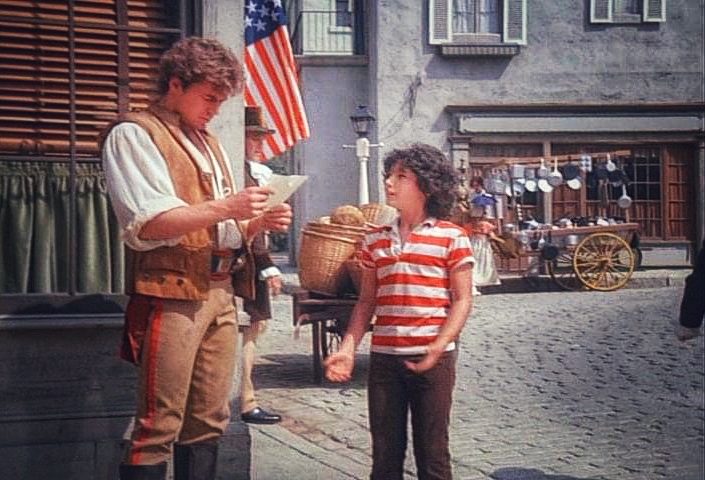 During a brief voyage in Baltimore, Francis Scott Key is distracted and drops a paper while crossing the street. Bogg nearly rips up an engaging poem about a Star-Spangled Banner. Jeffrey immediately returns it to Mr. Key, and they leave the scene. 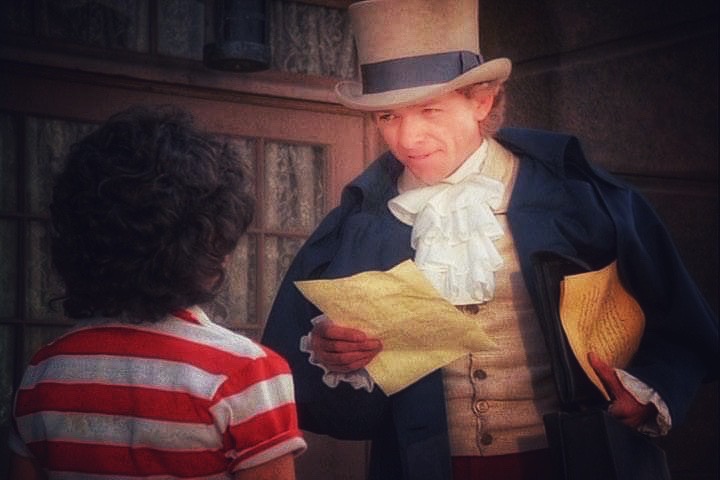 The Voyagers return to the same dining room long after the séance guests had departed. The cunning, beautiful Spiritualist Margaret uses their appearance to her advantage.

Margaret flirts with Bogg and easily pickpockets the Omni off him. She locks the Voyagers away, so she’s not exposed as a fraud. The Voyagers trick her guards the next day, and Jeffrey escapes through Margaret’s secret passages to show Houdini that he’s flesh and blood. 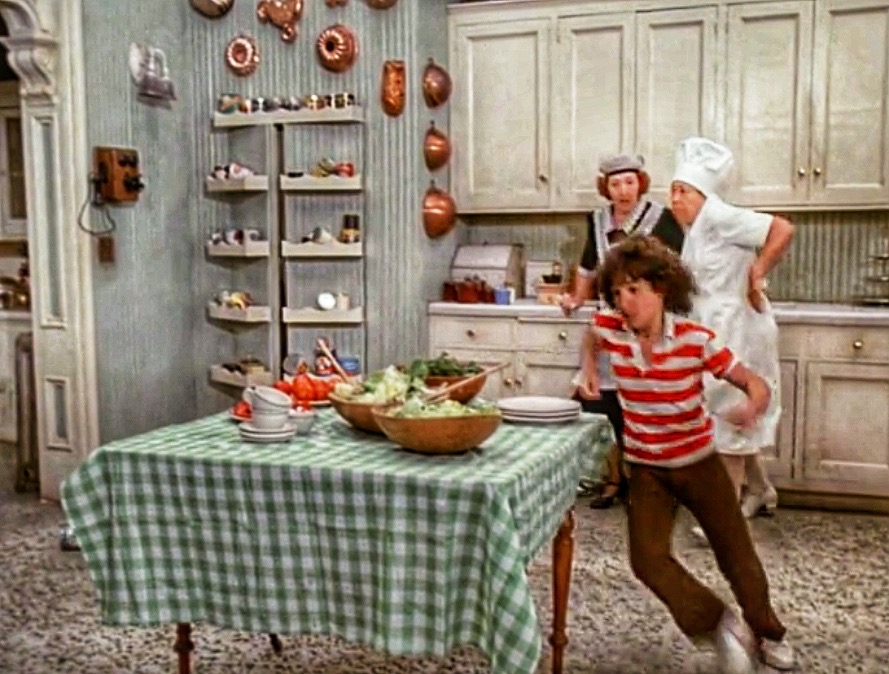 Determined not to lose her status and credibility as a Spiritualist, Margaret attempts to bury Bogg, Jeff, and Houdini alive in an underground box. 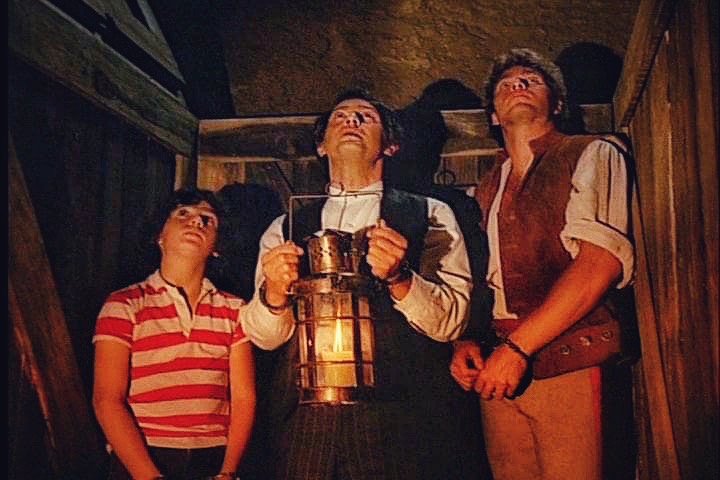 Bogg has tricks of his own, and they manage to escape with Houdini and the Omni he’d pickpocketed back off of Margaret with a “goodbye” kiss. 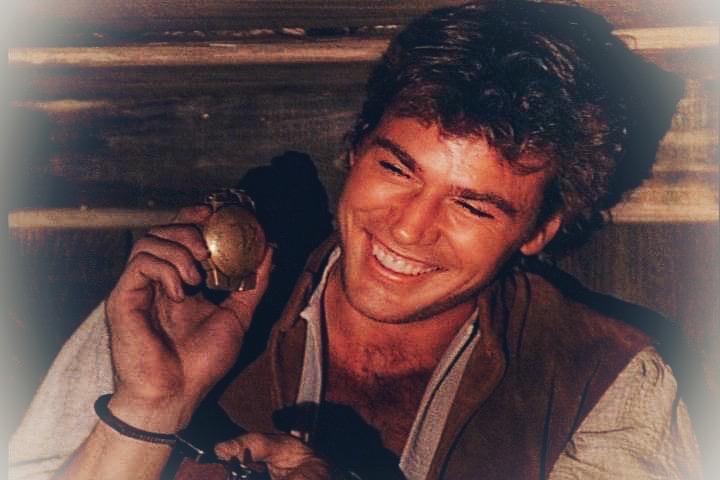 The voyage lands them in the middle of a tribal war, with spears flying at them. Bogg swiftly readjusts the Omni before Houdini can even remove his blindfold. 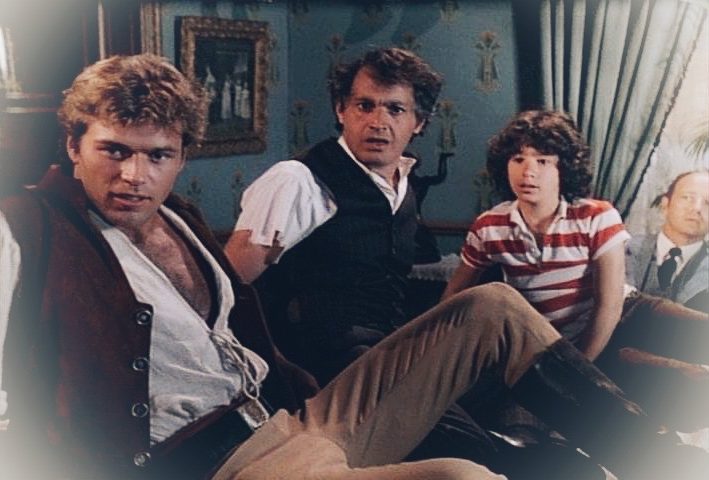 They make a grandstanding entrance during Maragaret’s seance with the press, and Houdini successfully proves her a fraud. Bogg and Jeffrey refuse to divulge the secret of their escape to Houdini, who respects their decision. 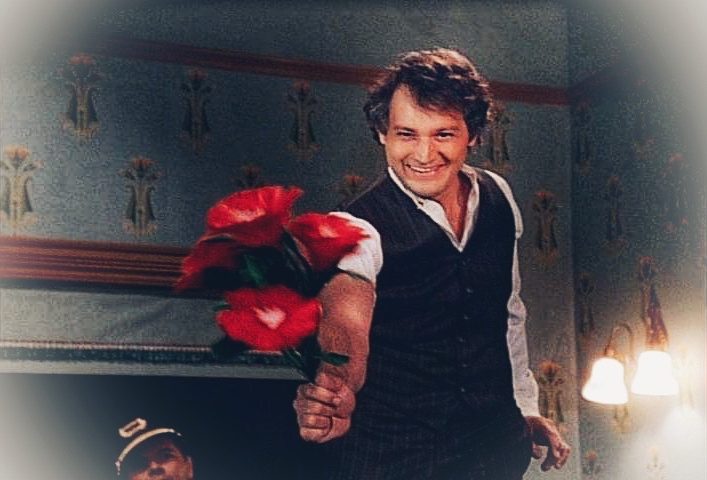 Back in Salem, the Voyagers land just in time again to save Abiah from the mob and her execution. 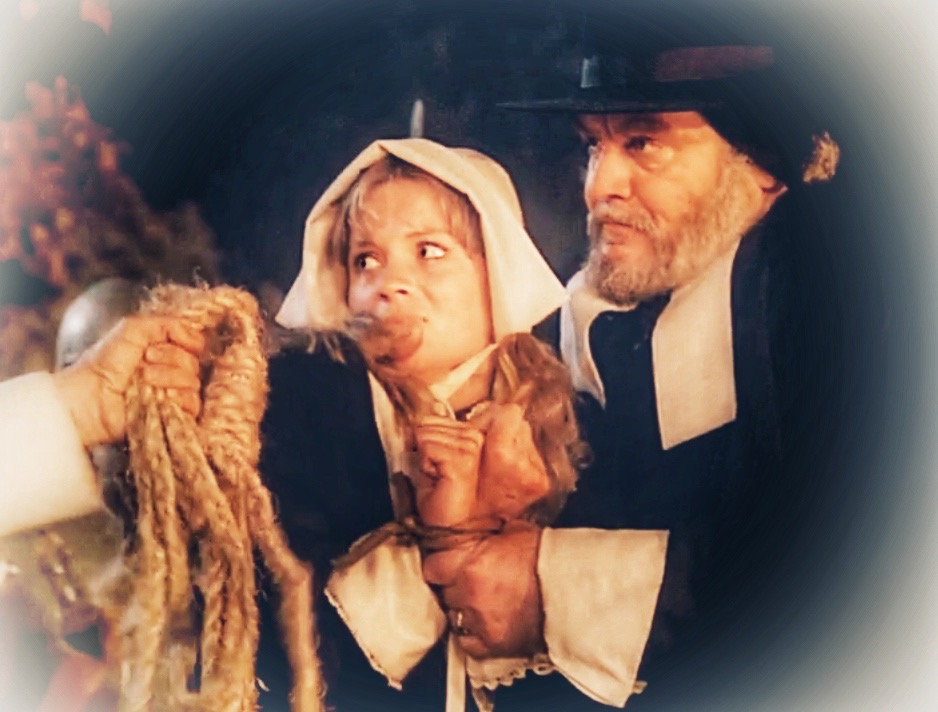 Bogg, Jeffrey, and Abiah fight off the angry mob and attempt a dangerous escape into a cliff. They jump into a lake and use Jeffrey’s idea to swim underwater with hollow reeds to breathe. 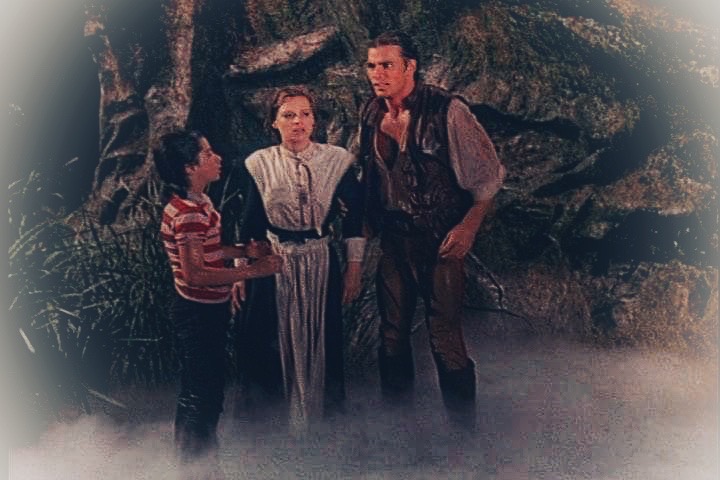 Bogg and Jeffrey use the peculiar mirror trick they’d learned from Margaret to frighten the village girls into confessing their lies. The trio pretends to be the ghosts of the murdered, innocent Puritans. Unbeknownst to them, a genuine spirit appears to plead for the truth, and the Salem Witchhunt ends once and for all. 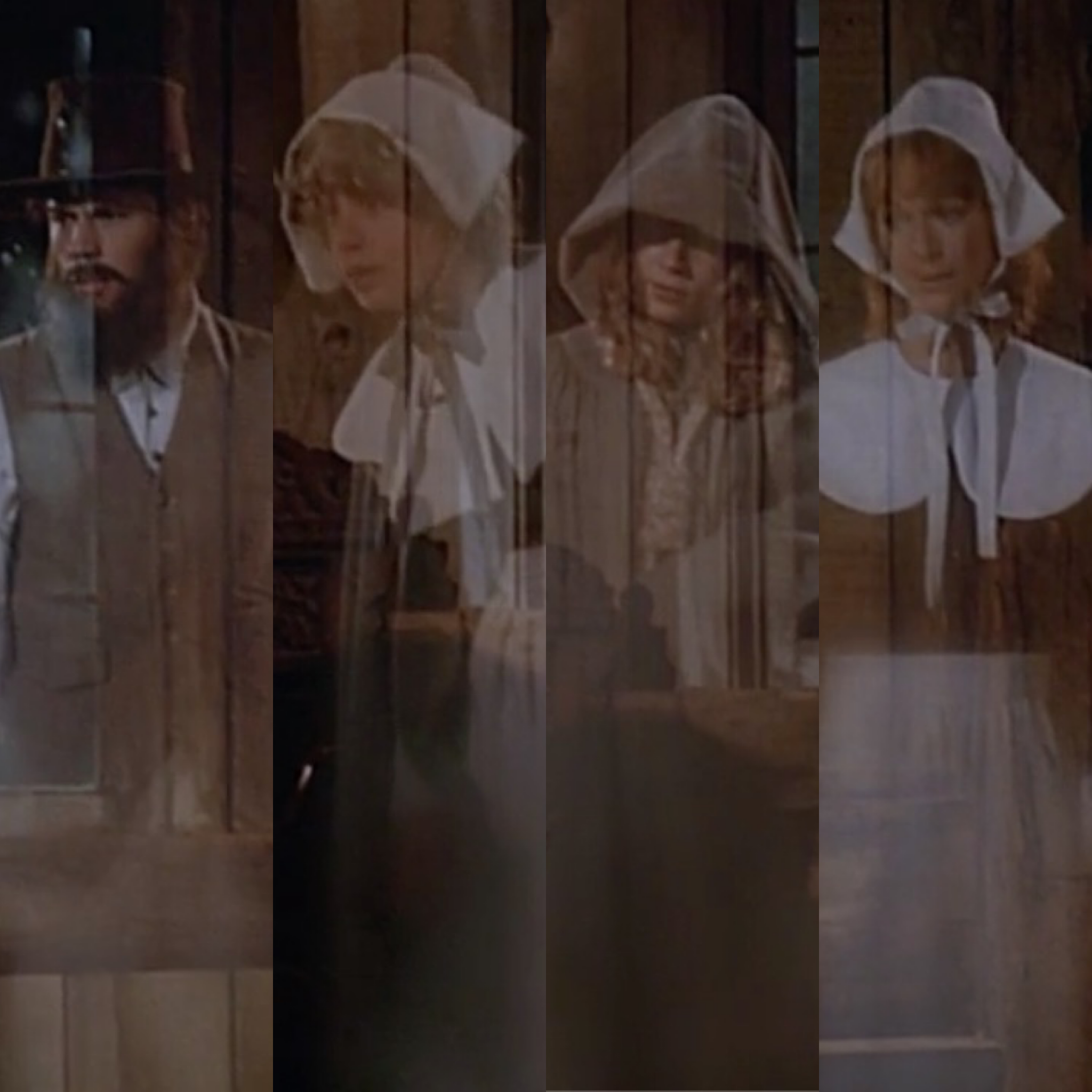 Bogg has a romantic goodbye with Abiah, but Jeffrey casually reminds him of “Little Ben” and her fiancee Josiah in Boston. The Voyagers congratulate Abiah for pulling off two ghost tricks but are spooked to learn she had remained in the alcove the entire time. 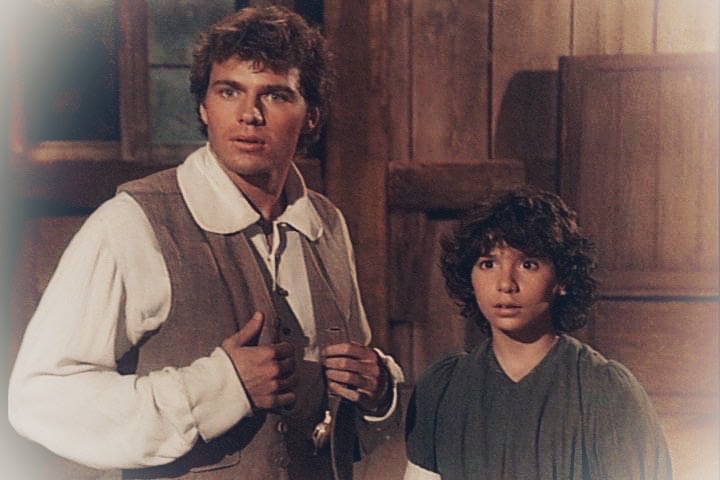 1. Continuity on TV wasn’t as big a deal in the ’80s as today, especially in episodic shows that jumped from adventure to adventure. Bogg and Jeffrey helped Abiah Folger’s son Benjamin Franklin with his kite in the 3rd episode, “Bully and Billy.” They make no mention of it in “Agents of Satan,” and Bogg doesn’t know who Ben Franklin is.

It was possibly due to the World Series running overtime, which pre-empted “Cleo and the Babe.” Scheduling changes forced “Cleo and the Babe” from the 3rd episode to the 6th. In “Bully and Billy,” Bogg and Jeffrey are close, and Bogg acts like a father figure. In “Agents of Satan,” they’re back to getting to know one another and don’t have the same closeness.

2. Susanna Martin was one of the fourteen women executed for Witchcraft. Abiah Folger pretended to be the ghost of “Goody Easty” or Mary Easty, also killed. Phineas Bogg played the ghost of Giles Corey, a farmer who was forced to plead guilty to Witchcraft and died after three days of torture. His body was crushed to death by stones. Jeffrey’s character wasn’t named but is suspected to be Martha Corey, Giles’s wife.

3. In actual history, Harry Houdini debunked the famous Medium, Mina “Margery” Crandon, in Boston, 1924. Her brother would play a mean ghost at her seances. In 1926, Houdini wrote and circulated a pamphlet called Houdini Exposes the Tricks Used by the Boston Medium “Margery.” Mina’s brother threatened his life, and Mina was so enraged she cursed Houdini to die by Halloween that year.

Surprisingly, Houdini died on October 31 from Peritonitis. Mina got the last laugh, but her reputation was in ruins. Even on her deathbed in 1941, she wouldn’t confess to her tricks. There is a rumor that Mina and the angry Spiritualists Houdini exposed hired the man who delivered the four or five stiff punches to Houdini’s abdomen that set off the rupture and infection. But nothing was ever proven.

4. This is the only episode where history changes from a green to red light by Bogg and Jeffrey’s interference.

5. November 13, 1692, is stated to have been a Friday. Most likely to keep with the theme of the episode aired on Halloween. Friday the 13th is traditionally recognized as a day of bad luck. However, it is Thursday on the current Gregorian Calendar, adopted in 1750. The Puritan date fell on a Sunday in the Julian Calendar, which the British Empire still used in 1692.

6. Hollywood often dramatized the Salem Witch Trials. In Colonial America, Witchcraft was a felony punishable by hanging. In Europe, Witchcraft was considered heresy and punishable by burning at the stake. In America, poor Giles Cory was pressed under stones. That scene would’ve been just as climactic as the fiery stake had they done the same to Bogg. In the episode, however, the Judge says Bogg’s manner of death was without precedent, so it would possibly be the first time they burned someone on the stake in North America.

7. When Abiah hides, the boulder she leans on wobbles. 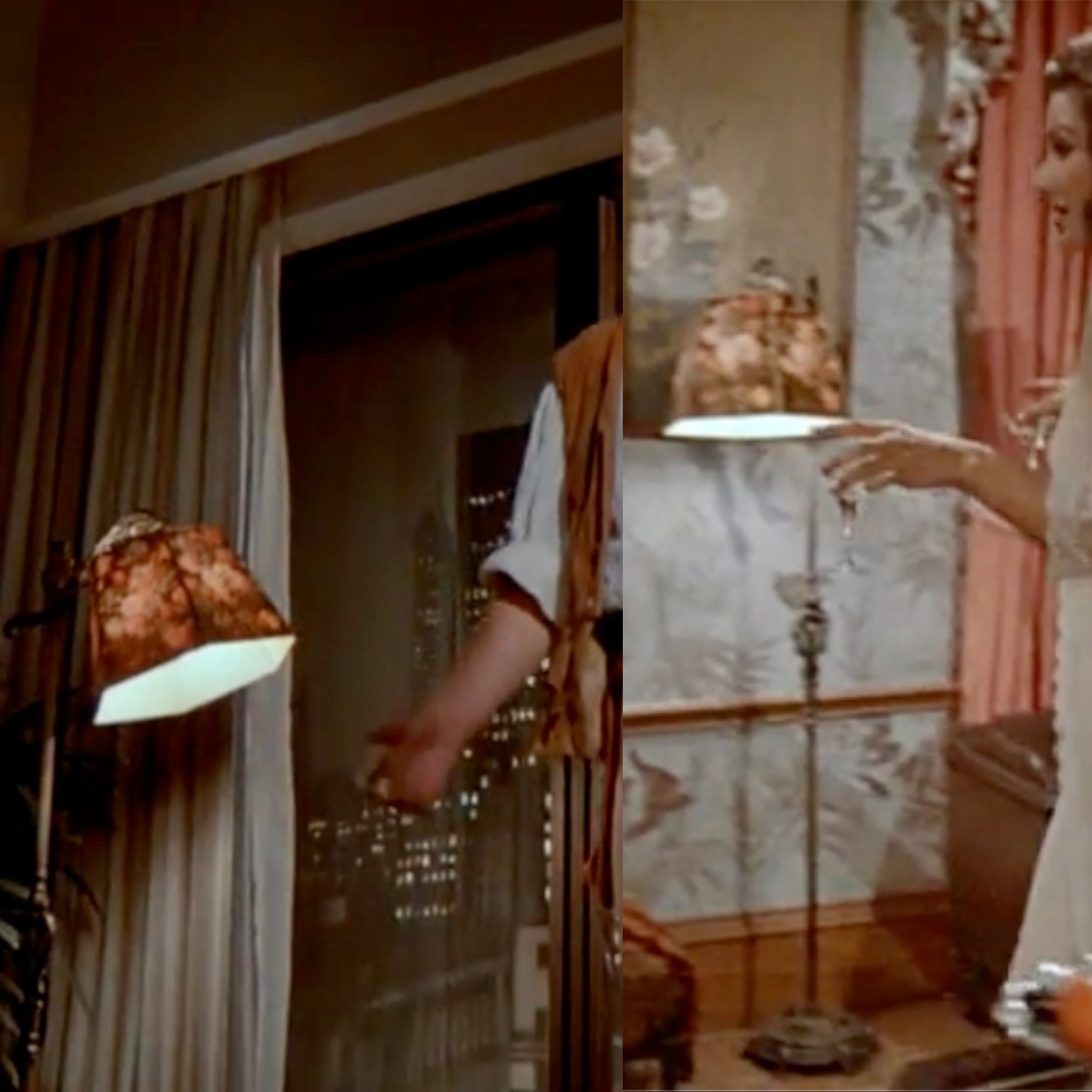 8. The lamp in Margaret’s apartment is the same in Jeffrey’s room when he awakens from his dream in the Pilot episode.

9. Abiah Folger married Josiah Franklin in 1689, three years before the Salem Witch Trials. In the episode, Josiah was relegated to her fiancee and left behind in Boston to allow a romantic scene between Abiah and Bogg. Josiah wasn’t present to help Abiah through the Witch Trial mayhem. 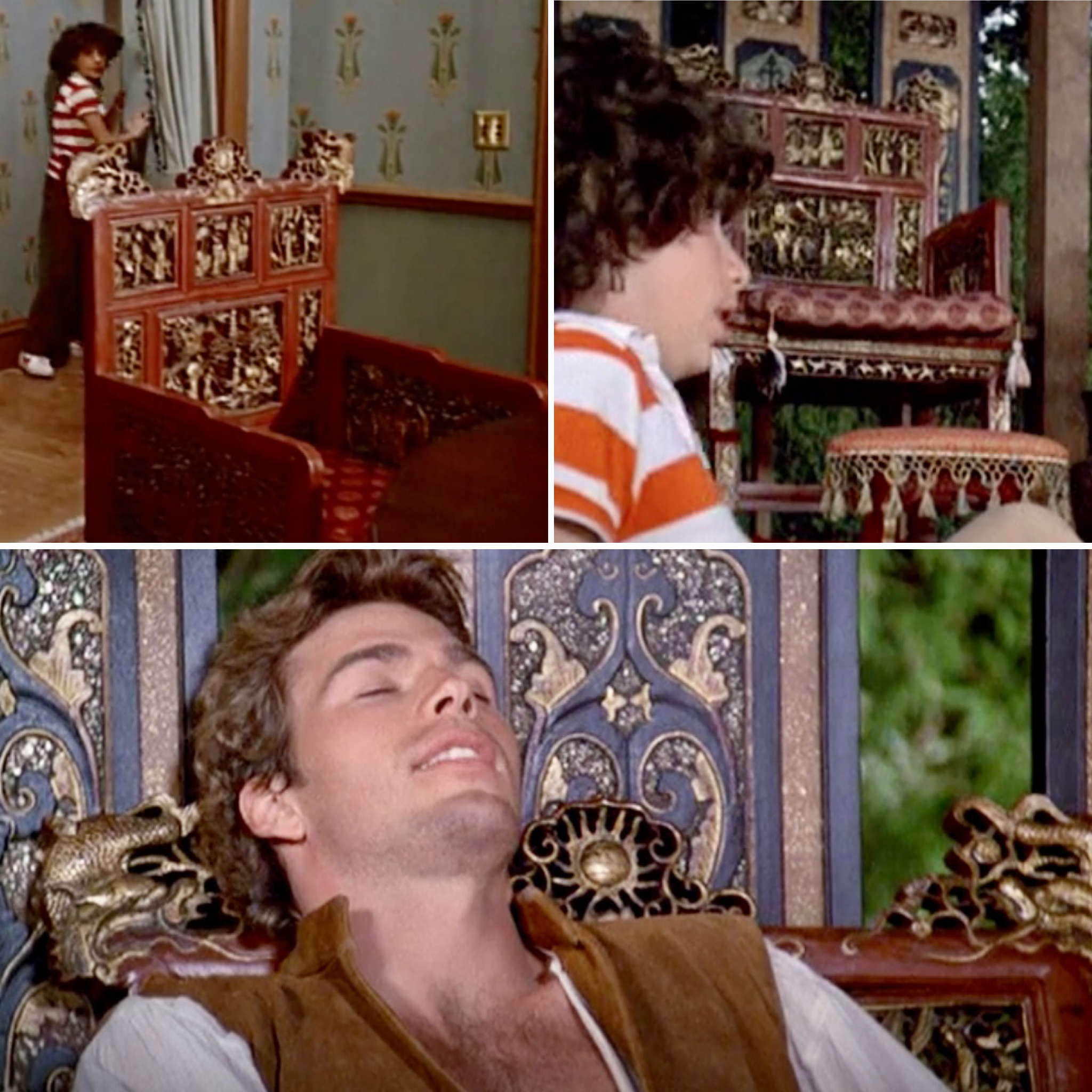 10. Margaret’s grand chair in her living room is also Kublai Khan’s throne that Bogg lounges on in “The Travels of Marco Polo … and Friends.”

11. When Jeffrey sprints through the kitchen and tosses the table at the men giving chase, a maid’s voice is heard shouting, “My cake!” However, the only thing on the table were big bowls of lettuce and tomatoes!